Prenuptial agreements (also called premarital agreements) are excellent tools for couples to plan  for their lives if their marriage does not work out.  The lawyers at Doi/Luke are located in Honolulu, Hawaii, and have handled numerous shapes and sizes of marital agreements over 25+ years.

WHAT IS A MARITAL AGREEMENT?

Prenuptial agreements in Hawaii, also known as “prenups” or premarital agreements are authorized under the Hawaii Uniform Premarital Agreement Act (“HUPAA” – Hawaii Revised Statutes section 572D). These are essentially contracts between two individuals who are planning to be married. Although prenups are contracts, they do not become effective immediately upon signatures of the parties. Rather, the prenups become effective when the parties actually marry. Therefore, if the parties end up not marrying, the prenup does not take effect. 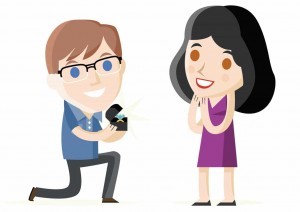 Think about a prenup before making the big step

WHY HAVE A PRENUPTIAL AGREEMENT?

What You Can Have in a Hawaii Prenuptial Agreement

Premarital agreements are sought for a number of reasons, depending on the desires of the marrying parties. Some examples are:

Contrary to what many think, premarital agreements are not just contracts to “shut out” a fiancee/fiance.  Rather, they are tools that a couple can use to determine what happens in the event of a divorce. This can allow couples to enter into marriage without worrying about worst-case divorce scenarios.

What You Cannot Have in a Prenuptial Agreement

If you would like to discuss more about what can and cannot be placed in a premarital agreement, please give us a call. Before meeting with us, it is often helpful to fill out our Premarital Agreement Questionnaire, in Adobe Acrobat (R) format, which you can download below:

In most cases, a lawyer drafting a premarital agreement represents only one of the couple, and will recommend that the other party retain their own attorney to represent them in reviewing the agreement.  This is an important component of the premarital agreement process.  If both sides have an attorney and the parties are divorcing later, then an unhappy party will have a difficult time attempting to throw out the agreement by claiming that they did not understand.

Many people are tempted to draft these types of agreements on their own, to save money.  But drafting an agreement of this importance usually calls for the services of an experienced family law attorney.  Typically, people are having these agreements prepared in order to save many, many thousands of dollars.  Therefore, this makes prenuptial agreements something  worth an investment to get it done right.

We have substantial experience drafting solid, cost-effective premarital agreements. If you have a question about Hawaii prenuptial agreements, or would like to set up a consult, e-mail us or call us at (808) 593-2199. We’ll be happy to hear from you.